“We must carry this win forward to remain steadfast in our work to shift from fossil fuels to renewable energy, and we must also turn our attention to reforming offshore oil and gas leasing. It is clear that the Department of Interior has been paying attention to the need for making decarbonization more accessible to Native and Indigenous homes, communities, and Tribal Nations, and we need that accessibility to extend even further."

Rapid City, SD – Today, in response to news from the Department of Interior that the Bureau of Land Management (BLM) will post notices for significantly reformed onshore oil and gas lease sales – an 80 percent reduction from the acreage originally nominated for lease sales – NDN Collective released the following statement:

“Today’s action by the Department of Interior is critical in reducing fossil fuel expansion and keeping us on track to achieve climate justice targets in the U.S.,” said Jade Begay, director of Climate Justice at NDN Collective and member of the White House Environmental Justice Advisory Council. “We must carry this win forward to remain steadfast in our work to shift from fossil fuels to renewable energy, and we must also turn our attention to reforming offshore oil and gas leasing. It is clear that the Department of Interior has been paying attention to the need for making decarbonization more accessible to Native and Indigenous homes, communities, and Tribal Nations, and we need that accessibility to extend even further.

“The IPCC report released just two weeks ago warned that we only have three years to significantly reduce fossil fuel use before we reach peak emissions worldwide and meet the target of limiting global warming to 1.5 degrees Celsius. We need to continue uplifting the voices of Indigenous experts to pass legislation that helps rebuild ecological systems and human communities that have been devastated by climate change.”

“We are grateful that the Department of Interior is listening to tribal and scientific communities in our call to end fossil fuel infrastructure development as a critical piece of mitigating the climate crisis,” said Kailea Frederick, NDN Collective Climate Justice Organizer. “Today’s announcement is a big win for Western states, where major oil and gas leases had originally been proposed despite this region already dealing with a mega drought, rolling black outs on high heat days, and intensive fires and smoke that make it unsafe to leave our homes.

“Despite calls by the U.S. government to ramp up fossil fuel extraction to fund yet another war, it is more urgent than ever that we continue working to phase out fossil fuels as part of our transition to renewable energy. We cannot ecologically afford to open up any more onshore or offshore oil and gas leases – to do so would be in direct violation of scientific data that calls for the need to rapidly reduce emissions at the source.”

Begay testified at an oversight hearing by the Subcommittee on Energy and Mineral Resources in December 2021, warning that leases of public land to extractive industries would further a rise in emissions, climate change, and ecological damage. You can read Jade’s full testimony here.

April 2022 Edition
A monthly recap of the indigenous world.


Sign up to get our newsletter. Delivered once per month.

NDN Collective Launches Community Engagement Survey for Distributing Nearly $50M to Native People in SD, ND, and MN Posted 7 months ago
“We have an ambitious goal of hearing from over 20,000 Native individuals situated in the tri-state area. Our voices and lived experiences matter - and so do our visions and dreams for an abundant future.”

Meet the Collective Abundance Fund Regional Advisory Committee Posted 7 months ago
The Regional Advisory Committee will be key to building the regenerative movement while supporting reciprocal relationships that are marked by collective learning, knowledge sharing and consideration of diverse insight as part of NDN Collective’s respective areas of work and commitment.

NDN Collective Announces “Community Action Fund” for Indigenous Frontline Organizers Posted 8 months ago
Grants up to $30,000 offered to support on the ground organizers and movement builders who stand on the frontlines to defend Indigenous Peoples inherent rights to self-determination and equity for all people and the planet.

NDN Collective Calls for Boycott of Rapid City Businesses with Racist Policies Posted 8 months ago
The goal for the ongoing boycott is to discourage community members from supporting businesses with racist policies & practices, and instead encourage them to use buying power to impact change by redirecting their dollars to businesses that stand in solidarity with Indigenous people.

NDN Collective Responds to SD Gov. Noem's Executive Order Restricting Critical Race Theory Posted 8 months ago
“Noem’s executive order is yet another move that tragically diminishes the capacity of our young people to see difficult historical truths with empathy. We need leadership whose actions ensure all of our youth will have enriching learning opportunities that prepare them for a transformative future."

NDN Collective Response to IPCC Report Pointing to Colonialism as Climate Change Driver Posted 8 months ago
The IPCC report acknowledging colonialism as a driver of climate change reinforces what Indigenous Peoples across the globe have been declaring for decades.

NDN Collective Releases Position Paper on Palestine Posted 8 months ago
"Today on Palestinian Land Day (يوم الأرض), we uplift the sacrifices that our people have made and continue to make so that we can fight for a liberated future and a dignified present. As Palestinians living in exile on Turtle Island, we have learned so much from our siblings in struggle and are grateful for their inspiring courage in the face of so much adversity."

'The Right OF Return Is LANDBACK'

Posted 8 months ago
Today on Palestinian Land Day, we uplift the ongoing struggle of our Palestinian relatives for liberation of their homeland and full return for all Palestinian people. We reaffirm that our solidarity as people runs deep and is both historical and ongoing. 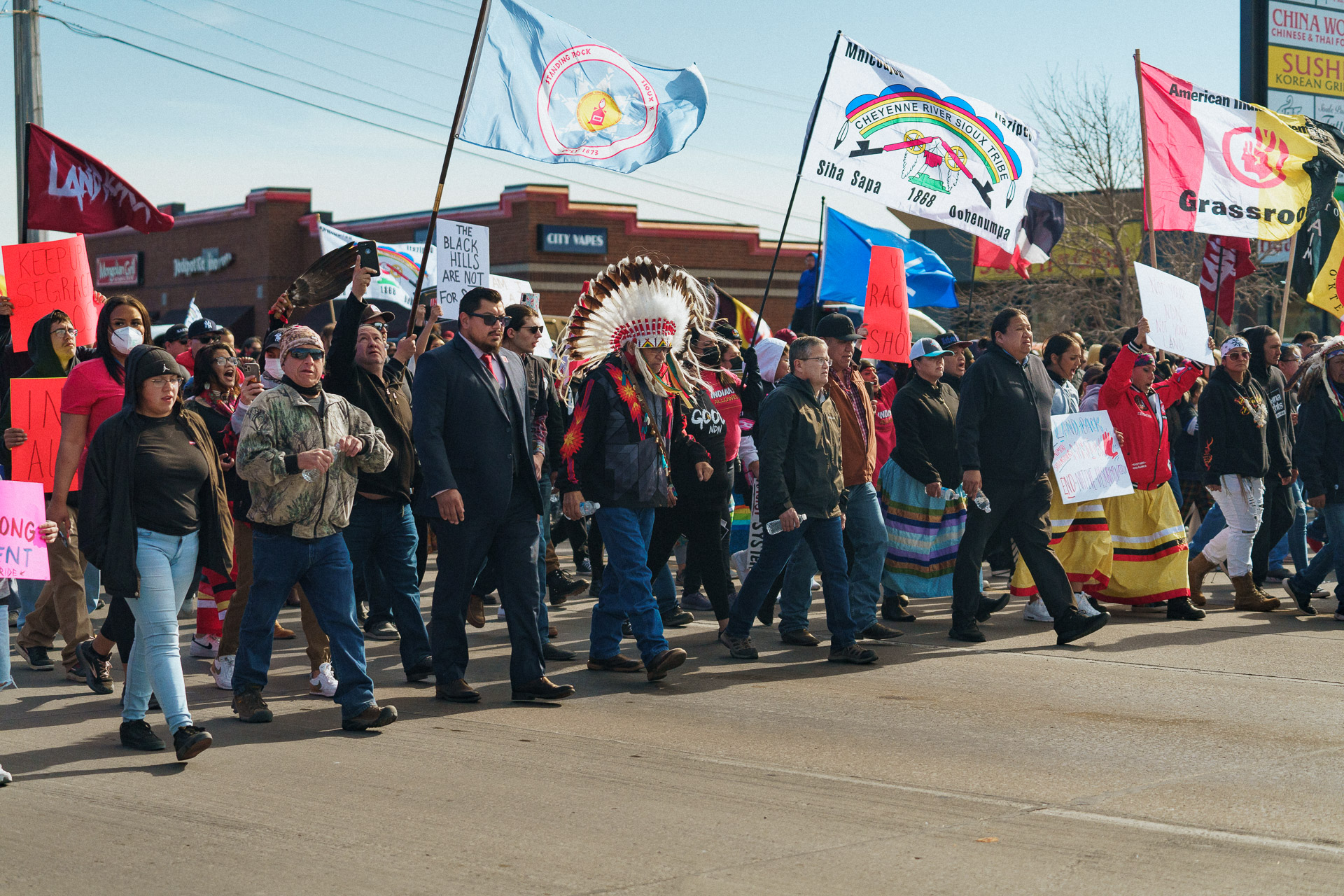 Posted 8 months ago
Citing the Fort Laramie Treaty of 1868, five Tribal leaders of the Oceti Sakowin (Seven Council Fires of the Lakota, Dakota, Nakota Nations) led a march on Saturday in Rapid City, delivering a notice of trespass and posting it on the door of the Grand Gateway Hotel.